I'm quite enjoying the Green Smoothie Challenge. I can't honestly say it's made me feel much different (I eat a lot of vegetables anyway), but it's certainly not doing me any harm. My only complaint is having to clean my blender every day - normally I'd only use it once or twice a month. 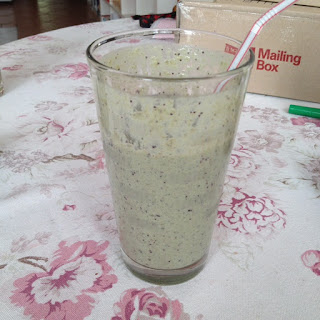 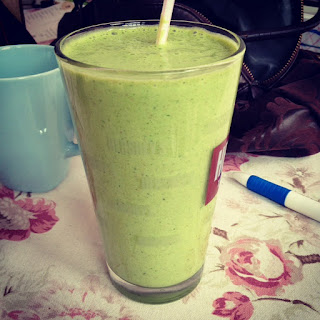 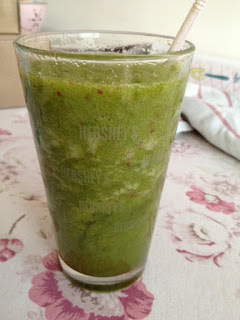 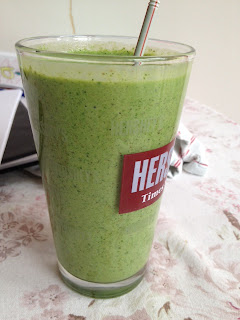 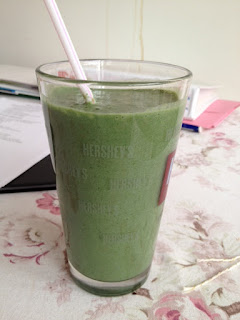 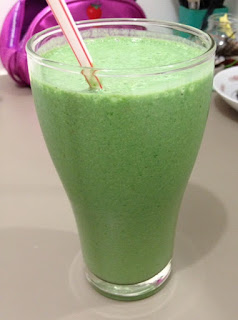 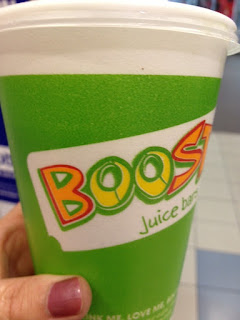 Day 7: a 'Green, Lean and Clean' from Boost Juice, which had pineapple, celery, wheatgrass and a couple of other things I can't remember


Random things:
1. I took Amy's advice and peeled my bananas then froze them. I already have a pile of unpeeled bananas in my freezer as I can't eat them once they get really ripe so I throw them in there for muffins. However, peeling them while frozen is impossible, and letting them thaw makes them turn to mush (which doesn't matter for muffins but defeats the purpose of having an icy cold banana in a smoothie).

2. I won't cheat and go to Boost again. It was ridiculously expensive for what amounts to a bit of juice, and no doubt it was packed full of sugar. And it gave me brain freeze.

3. I prefer the milky ones to the non-milky. I didn't really like the apple, cucumber and lettuce one. I would probably like it better if I had a proper juicer (I am saving but those things go for several hundred dollars so it will be a while), but the texture in just a blender was kind of slushy.

4. I don't know why I used soy milk as opposed to the regular skim milk I have at home. I think I just wanted something organic. I know you can get organic skim milk as well, so that's not really very logical. Oh well.

Sabine from Echolife has done a round-up of how other people have been getting into the challenge. Did you do it? How is it going?
Posted by Dee at 8:48 AM

Dee
I talk about stuff that interests me. Teen in the 80s, still stuck in the 90s. Watch too much TV and don't read enough books. Love bacon, Paul Rudd, perfume and makeup in that order.

Me On The Interwebs